Home Entertainment QUALITY FILMS, and What They Should Be 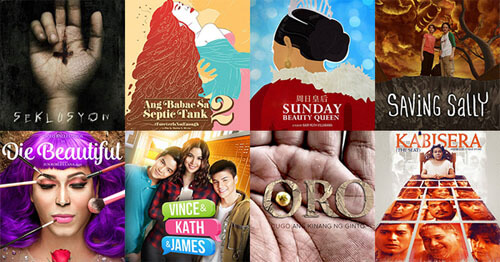 The Filipino movie industry has grown exceptionally not just with its stars being recognized internationally but also with how the people behind the camera made great films possible. We, as viewers, continuously look for changes in our films. Because of this, a lot of us might have the impression that a mass number of people should now know the difference between good films and bad ones. What a relief that would be.

Sadly, not everyone does. A thread by InterAksyon caught, not only, my attention but a lot of netizens as well which made me really, really pissed. I, first, assured that I have calmed down before posting on my Facebook account. Here is my actual post: 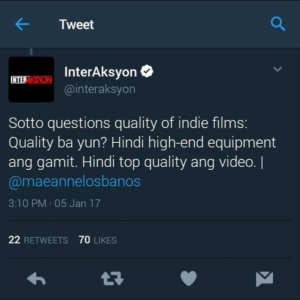 After destressing myself with two cups of rice, pork sisig, Chinese chicken, ginisang upo, and lots of water for rehydration, my heart is beating normally and my hands have stopped shaking. Now that I am calm, I can express my thoughts without hurting someone’s feelings, believing I can give my opinion without personally attacking people.

Let me start by asking this: If I start writing using a MAC Airbook with faster internet connection yet put gibberish on my paper, can we call that quality writing? If a person who sells cupcakes uses the latest kitchen utensils in the market but bakes awful tasting cupcakes, will you still call it quality cupcakes? Same goes with movies.

Moving on to QUALITY. According to my friend here, Merriam-Webster Dictionary, quality is how good or bad something is. It is a characteristic or feature of someone or something has, or something that can be noticed as a part of a person or a thing. However, it is also stated that it is A HIGH LEVEL OF VALUE OR EXCELLENCE. Now, tell me, are the chosen films for 2016 MMFF of low value and excellence? I think not.

How do you define quality movies? Is it high quality if the movie spoon feeds every information the audience needs to know? Is it high quality if, in every scene, a product will be shown or endorsed by your artists? Or high quality means giving (what do you call them?) usual MMFF moviegoers something to laugh about for two hours, and when the movie ends leaves the audience still hollow inside. No, that is not quality. Remember HIMALA? Who would forget Nora Aunor’s award-winning film? Himala is an MMFF film (for those who still don’t know) It is deep, meaningful, and leaves a mark to its viewers. It was decades ago but still people look up to it as one of the best films the Filipino movie industry have. That’s how you measure quality films — through the message, the purpose of it, what it plans to leave its viewers. Not with what equipment used, or if they have high-end technology to edit their special effects, or have the latest software for its CGs, or big artists play lead roles, because that is the costs of the movie and not quality. And, if good quality films also means how much someone (don’t care if it’s an individual, or big company names) is spending to make a movie, then fine. Your films are all of quality.

Need I remind you that the audience are not dumb. This is a thinking generation, capable of judging what films are better, and what still needs improvement. When it comes to movies, the Filipino’s taste is evolving. We crave for something more than what you used to offer us. We are in dire need to watch films that would rattle our brains and make something spark inside of us.

But Patch, you’re being bias. MMFF is, afterall, a fundraising and “not for arts sake”. That is why someone from the senate thought of a brilliant idea to file a reso that MMDA should establish a film festival “exclusive for the independent films during the long semestral break.” Isn’t this guy aware of independent film festivals like CineMalaya? Please, give him a ticket or something. If this is a fundraising, then why not show your mainstream movies every summer?

Honestly, I had too much for one day. It is quite sad to hear from someone with such big name in the industry talks about quality when, the truth is, most of our mainstream films are slowly beginning to be a 2-hour commercial skit of different products. Let the independent film industry continue to produce good films (which tells me is what mainstream movies should be doing too) — GOOD QUALITY, INTERNATIONALLY ACCLAIMED, and AWARD-WINNING FILMS.

But you can also not mind me. Who am I to tell you these things right? Kthanksbye.

Now, re-reading my post, I have come to a conclusion not everyone in the industry loves the industry itself. Helping the small players make name in the Filipino industry will surely make it better.