After every election of a new Philippine President, 4,000 to 6,000 government positions need to be filled up.

At the onset, the initial top posts that need new government managers are for 421 positions. These top posts,  according to Peter Laviña, spokesperson of the Duterte Transition Team, will go through a rigorous selection process and be shortlisted by the Duterte transition core of Leoncio Evasco, Jr., Christopher Go, Carlos Dominguez, Atty Salvador Medialdea and Laviña himself. The core team is looking for people who can deliver Duterte’s marching orders.

According to Laviña, the core team divided the screening of top candidates among themselves: Evasco evaluates the social agencies, Christopher Go on the security sector, Dominguez on the business agencies, Medialdia on the judiciary and himself on infrastructure. Duterte will be given three names for each position and he will be the one to decide whom to pick.

The topmost jobs at stake are more than 400 appointive positions for Cabinet secretaries, undersecretaries and assistant secretaries.

The caveat in applying for vacated government posts is summarized in this image: 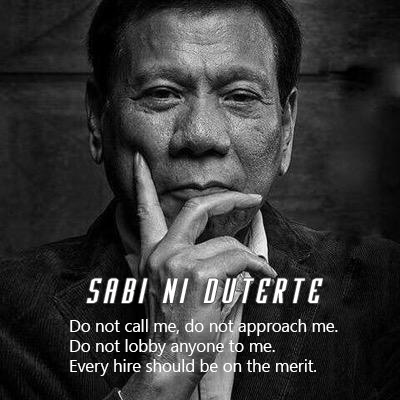 On the more than 6,000 available posts presumed to be vacated, the posts will be  jobs in agencies under the departments and positions in corporations either owned or controlled by the government.

According to Laviña, “The appointments to most of the posts will be taken care of by whoever will be chosen to head the departments.”

In a Rappler report, president-elect Duterte said he would give government employees more incentives as part of a reforms in his administration. He said that the large gap between salaries from the private and public sectors discourages the best people to enter government service.rvice, he said.

“For as long as the pay in government sector and private sector has this disparity, walang magtratrabaho sa gobyerno (no one will work for government),” he said.

One way to increase compensation among government employees, Duterte said, is to increase their allowances, given the controlled pay as set by law.

“I would offer them by way of allowances instead because salaries are controlled, so that I can bring in parity the pay of the private sector,” he said.

Duterte stressed that he wanted positions to go to the “best and the brightest” and thus, the old “palakasan” will not be tolerated. Even in the appointments or assignments on military and police posts, the Board of Generals will said to be reactivated.

Currently, applicants to various top posts are done by personally going to Davao City to meet the Mayor and Presumptive President, or submitting their resumes through the Mayor’s office.