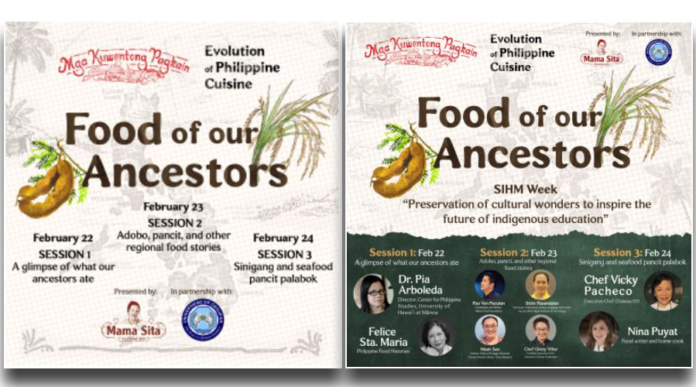 As part of the event, Filipino cuisine will be examined in terms of its roots, as well as the various foreign influences that have shaped it. We’ll be able to learn more about how our Filipino culinary heritage has influenced what we eat and make now, thanks to the participation of students from all over the university and the surrounding neighborhood.

Learn more about Filipino food preparation and consumption from February 22 to 24 at 10 a.m. Pigafetta’s Philippine Picnic, written by food historian Felice Sta. Maria, documents the earliest encounters between indigenous Filipinos and Europeans, as well as the variety of foods and beverages they shared. Professor Pia Arboleda, director of the University of Hawaii at Mnoa Center for Philippine Studies, will discuss the history of Adobo and how it is a cuisine that is uniquely Filipino.

Many other influences on Filipino cuisine, such as those from our Southeast Asian neighbors, Chinese trade, and the Spanish Galleon Trade will be discussed in this series as well. Participants will also be offered a variety of cooking demos on the last day to give them a better understanding of popular Filipino cuisines like sinigang and palabok. The University of Dagupan will also demonstrate how to smoke and bottle Spanish-style smoked bangus.

This event is open to the public. To register, participants can sign up through Google Forms at https://forms.gle/LvsoFJj1PRVQDMRB8.

Speakers from a variety of fields will offer their expertise over the course of the three-day conference. It includes scientists, lecturers and chefs.

Since its release, Felice Sta. Maria’s Pigfetta’s Philippine Picnic is now accessible online and in bookstores nationwide. It may also be purchased at the NHC’s Ayala Museum Store and other prominent Philippine bookshops.