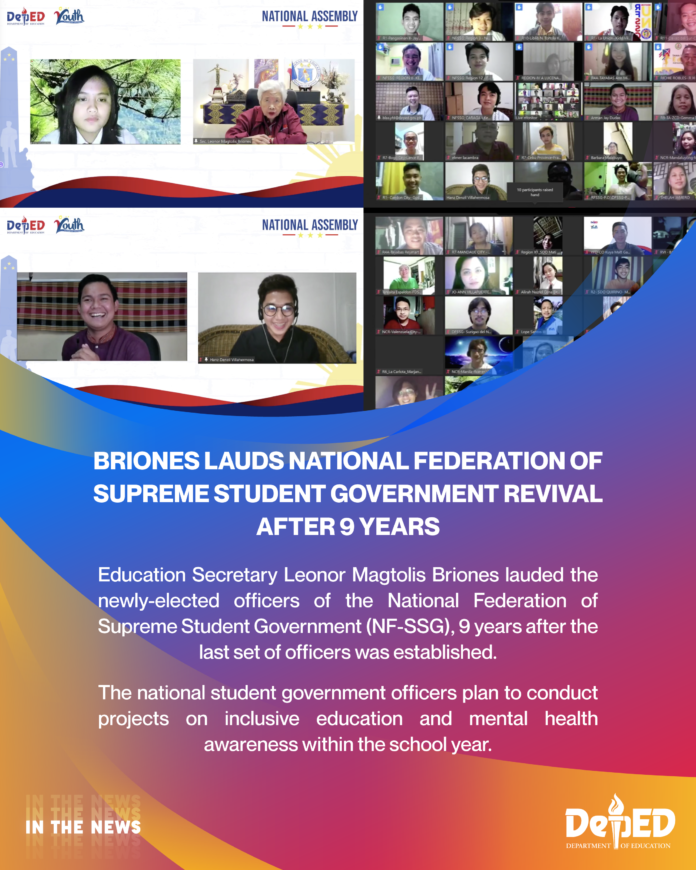 “Nakakatuwa that these young people were chosen by learners to lead all the supreme student government in the Philippines. Kita mo rin sa kanila that they are willing to step up and take charge. Sabi nga nila, [habang] bata pa ang ating mga learners, kailangan natin silang turuan [more on] citizenship and service to the country in a very real sense. We have to move towards being universalistic; to think of the people we serve,” Secretary Leonor Magtolis Briones said.

Meanwhile, BLSS-YFD Chief Adolf Aguilar highlighted in his message that many student leaders have been waiting for the said election since the last one was held almost a decade ago.

“I am with awe that this election is a reality now. This is truly the so-called renaissance of our SSG. As the newly elected officers of the NF-SSG, I challenge you to become role models to the youth. Be paragons who have puso, galing at talino in doing your responsibilities as future leaders of our country,” YFD Chief said.

“It has been nine years since the last set of officers in the NFSSG was established, so it is up to us to once again to ignite the fire within the youth. We are expected to provide an impression that we are finally back after being dormant in the recent years. However, I also feel so honoured to have the opportunity to implement projects that would improve the education sector of our country,” newly-elected NF-SSG President Caballes said.

After their election, the national student government officers will meet virtually to discuss their plans and programs for the learners all over the Philippines.

“As of now, we are still on the brainstorming process. However, things like inclusive education, mental health awareness projects are the common advocacies of each of the regional presidents. We are hoping to conduct and implement projects [as] regards to the mentioned ideas in this school year despite the limited contact. [Also], we are hoping to conduct activities in line with the core values of Department of Education,” Caballes noted.

Supreme Student Government (SSG) is the leading co-curricular student organization authorized to operate and implement programs, projects, and activities in schools nationwide. It serves as the foundation for good governance, volunteerism, unity, and cooperation by providing students with various avenues to improve their leadership knowledge, skills, and attitudes. It also hones students to become better members of the society following the ideals and principles of participatory democracy and good citizenship.