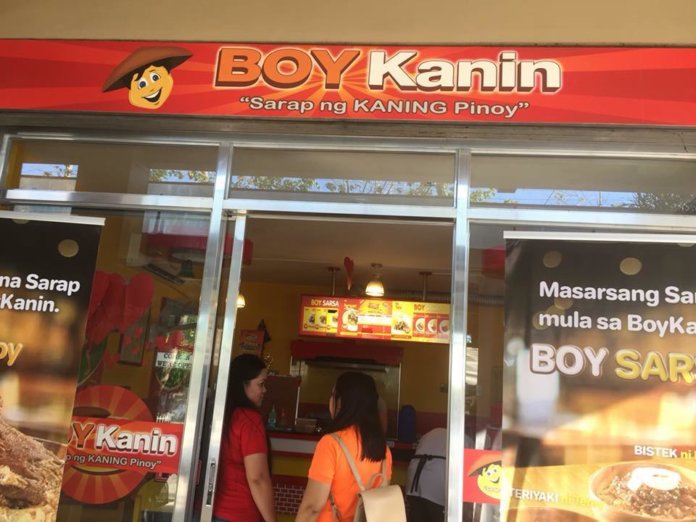 “Boy Kanin” is the brainchild of Antonio Z. Atienza and Ronald Callao. The two met at a meeting completely unrelated to food and were drawn together by their similar passions for Filipino cuisine. Both come from unrelated industries: Antonio Z. Atienza is a renowned jeweler and the owner of Golden Hills Jewelry, Inc. Ronald Callao was a former Head for Circulation at Business World and BusinessMirror. Ronald decided to return to his history with food, having owned a carinderia in Paranaque and having worked in Jollibee before going to the newspaper industry. He decided to make his passion for cooking and eating delicious food a business, hence his venture into a second food stall.

Antonio proposed the concept of “Boy Kanin” to Ronald. His idea of infusing the meat or seafood ulam sauce into the rice was inspired by his foreign friends’ search for local cuisine. These friends actually enjoyed mixing the rice into the sauce of kaldereta. Such a practice continues in the home of Filipinos and local restaurants serving the same fare. What distinguishes “Boy Kanin” from these establishments is the rice and ulam sauce being mixed for you.

With Filipino food becoming a popular eat out treat for locals and foreigners alike, “Boy Kanin” hopes to not just feed hungry stomachs but also to remind us why we always return to our homegrown cuisine.

Craving for your mom’s home cooked adobo or caldereta? Are you so hungry that only a bowl of kare kare or a plate of bistek can satisfy your growling stomach? Look no further than Boy Kanin, a food stall that serves paella rice meals but with your favorite Filipino ulam. From the tangy taste of caldereta, the classic savory sauce of adobo, to the filling bits of dinuguan, you can order a “bowl” of these favorite meals and have them on-the-go.

“Boy Kanin” serves your favorite Filipino fare at affordable prices and delivers such with the quality of a midrange restaurant. Unlike other regular food stalls, each bowl of rice is stir fried and then infused with a cooked sauce of your choice. An order from Mister Kanin doesn’t just curb hunger—it also leaves you comforted by the familiarity of home.

Boy Kanin officially welcomed guests and customers to their first full service restaurant in the town of Orani, Bataan last September 28, 2018. There was even a motorcade which was graced by no other than Boy Kanin mascot to celebrate the momentous event. Tricycles, cars and vans joined the motorcade as kids and kids-at-heart were delighted with the presence of Boy Kanin mascot who gamely posed for photo opportunity.

The motorcade was then followed with a short blessing, ceremonial ribbon cutting, tossing of rice  and coins to those who were present to witness the said event. Sticking to the festive Filipino theme, Boy Kanin’s first full service dine-in restaurant had a modern colorful interior which will remind one of a town’s fiesta which perfectly fit Boy Kanin’s range of food offerings. It was designed by Architect Lumor Cenon Cesar with the help of Boy Kanin Orani owners Mr. and Mrs. Capili.

“We are truly proud of how we started as small food cart concept and now we’ve turned into a full dine in store,” said Boy Kanin’s President and CEO, Mr. Ronald Allan Callao.  His vision five years ago was to simply introduce “real Filipino fastfood” in affordable prices. “Our culture has so much more to offer to the world. I’d like to envision Filipino food to be recognized all over the world,” he added.

Mr. Ronald Allan Callao has a lot more dreams and plans for Boy Kanin.  For him, there’s a lot more room for improvements as far as Boy Kanin is concerned. He plans to open more branches (hopefully more dine-in restaurants like this one) in the future. In the next couple of months, expect Boy Kanin to launch several well-loved Filipino desserts and dishes like suman, crispy kare-kare, kapeng barako, among many others. So far, Boy Kanin’s R&D are doing its job in trying and testing all the foods before they are launch in full swing. “But everything is now in the works,”assures Mr. Callao.

Boy Kanin’s Orani Bataan branch has a sitting capacity of  40 to 45 people. The restaurant is strategically located in high traffic area with landmarks such as Our Lady of the Most Holy Rosary (Boy Kanin is just a few steps from the church itself), several schools, municipal hall, gymnasium as well as residential areas.