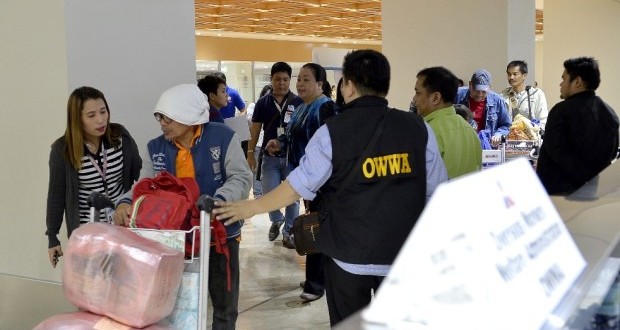 Labor and Employment Secretary Rosalinda Dimapilis-Baldoz yesterday ordered DOLE Undersecretary Ciriaco A. Lagunzad III and Overseas Workers Welfare Administration Director Albert Valenciano to leave immediately for Saudi Arabia and assist POLO officials in Riyadh and Jeddah in negotiating for the salaries and benefits, as well as for the release and exit, if necessary, of OFWs working in companies experiencing financial troubles. She also directed them to meet with executives of the companies and with their Filipino workers.

“There are two companies that we have specifically in mind with a large concentration of OFWs and who have been reported to be in financial dire straits—Saudi Oger Ltd. and Saudi Bin Ladin Group. Both have been experiencing difficulties in paying for the salaries and benefits of some OFWs,” said Baldoz.

“I don’t want their inability to meet their financial obligation affect our OFWs longer than they already had, so I have directed Undersecretary Lagunzad and Director Valenciano to visit Saudi Arabia to press this point to the employers,” she explained.

Last week, Labor Attaches Restituto dela Fuente and Jainal Rasul Jr. reported that construction conglomerate Saudi Oger Ltd., which employs 8,757 OFWs all over Saudi Arabia—1,407 alone in its construction division in Jeddah and Western Saudi Arabia, and 1,667 in its maintenance division—is facing cases before the Saudi Labor Court for
unpaid salaries of some of its workers.

“Some of these cases have been recurring since last year, even before the global oil price downturn. Some Saudi Oger Ltd. workers, specifically those in its construction division, have been experiencing delays in their salaries that are not oil price declinerelated, although the company has had lesser difficulty paying workers with salaries of
5,000 Saudi Riyals and below,” said the labor attaches in their report to Secretary Baldoz.

They said this is one of the reasons why some OFWs working in Saudi Oger Ltd. are not renewing their contracts; why some have decided to transfer to other companies; and why others still have decided to come home. At present, the POLO officials reported there are a number of OFWs who have decided to stop working while waiting for their exit visas and end-of-service benefits, but they have since resumed work. They also said 300 more OFWs have opted to be repatriated, or to transfer employment; and the POLOs in Riyadh and Jeddah are assisting 113 more OFWs who have filed complaints against their employer with the Saudi Labor Court.

Informed that Saudi Oger Ltd. has yet to repatriate 43 OFWs whose contracts have ended, Baldoz said she had instructed Undersecretary Lagunzad to assist the POLOs in fast tracking the repatriation of the 43 as well as the other OFWs who would like to already leave Saudi Arabia. POEA records bear that total deployment to Saudi Oger
Ltd. between 2014 and 2015 was only 4,837. Of this number, 96 percent were deployed in 2014. The deployment in 2015 was less, reaching only 176 OFWs.

Because of this, Baldoz has directed the POLO in Jeddah and Riyadh and the POEA to already stop the deployment of OFWs to Saudi Oger Ltd., as well as to the Saudi Bin Ladin Group, if the two companies could not quickly settle their problems with their workers.
This, even if the POLOs reported that Saudi Oger Ltd. management announced through a letter to all its employees that starting March, all salaries will be paid before the end of the month and all outstanding unpaid salaries will be paid progressively. It also said it is not terminating its employees, but merely plans to transfer them in certain divisions as part of its three-fold strategy.

Baldoz noted this development, and said Lagunzad and Valenciano should see to it that this commitment is delivered.

“Saudi law imposes heavy fines against companies not paying their workers’ salaries,” she said. She further directed Lagunzad and Valenciano to already tap the government’s repatriation fund and the existing repatriation insurance to bring the OFW workers of the two companies safely home.
In a related development, Labor Attache dela Fuente yesterday reported to the Secretary an apparent suicide incident involving an OFW at the Saudi Oger Ltd. in Riyadh.

In his incident report, dela Fuente said the OFW was a welder employed at the company’s Building Materials Trading Company. “He was reportedly found dead at 5:30 A.M. on 29 February at a BMTC workshop, about a kilometer from the deceased OFW’s accommodation at Oger’s Al Qadisiya Camp in Riyadh, KSA. His co-workers said the deceased appeared to have committed suicide, but the Riyadh Police is yet to release the results of its investigation. The
deceased’s brother, also an OFW working at one of Saudi Oger’s contractors, is with him at present,” said the labor official.

Baldoz instructed Labatt dela Fuente to coordinate with the Philippine Embassy and Saudi authorities to fast track the repatriation of the remains of the OFW and the payment by Saudi Oger Ltd. of all his benefits as an employee. She also directed Overseas Workers Welfare Administration chief Rebecca Calzado to facilitate the payment of all the benefits due the OFW and his family. The deceased is an active OWWA member. As such, his family shall be entitled to a P200,000 death insurance and P20,000 burial assistance. His dependents can also avail of OWWA scholarships
and family members may also avail of OWWA livelihood assistance.

“We express sympathy to the family of the OFW and join them in their prayers,” said
Baldoz.