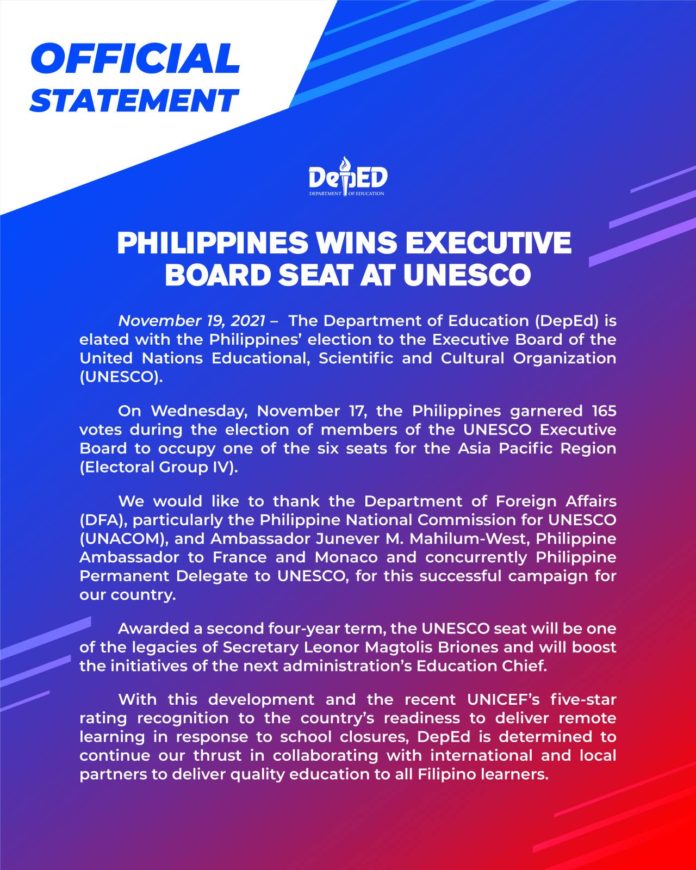 Bravo Filipino | Philippines wins Executive Board seat at UNESCO | November 19, 2021 – The Department of Education (DepEd) is elated with the Philippines’ election to the Executive Board of the United Nations Educational, Scientific and Cultural Organization (UNESCO).

On Wednesday, November 17, the Philippines garnered 165 votes during the election of members of the UNESCO Executive Board to occupy one of the six seats for the Asia Pacific Region (Electoral Group IV).

We would like to thank the Department of Foreign Affairs (DFA), particularly the Philippine National Commission for UNESCO (UNACOM), and Ambassador Junever M. Mahilum-West, Philippine Ambassador to France and Monaco and concurrently Philippine Permanent Delegate to UNESCO, for this successful campaign for our country.

Awarded a second four-year term, the UNESCO seat will be one of the legacies of Secretary Leonor Magtolis Briones and will boost the initiatives of the next administration’s Education Chief.

With this development and the recent UNICEF’s five-star rating recognition to the country’s readiness to deliver remote learning in response to school closures, DepEd is determined to continue our thrust in collaborating with international and local partners to deliver quality education to all Filipino learners.

A Filipino in Sicily: Chef Morris Danzen on Filipino-rooted cooking