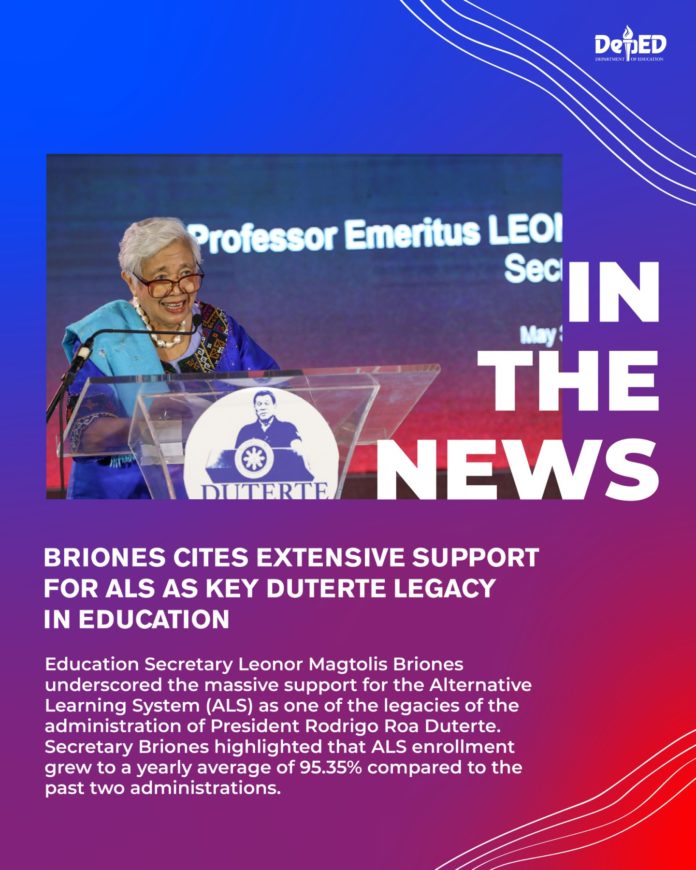 On Day 2 of the Duterte Legacy Summit: Final Report to the People, Secretary Briones highlighted that ALS enrollment grew to a yearly average of 95.35% compared to the past two administrations.

“Under the Alternative Learning System, we were able to attract and rope in 4,228,350 out-of-school youth and adults who are now in ALS. These are the kids whom others describe as those who have fallen through the cracks, who cannot pursue education, who have to work and, for one reason or another, cannot attend classes the traditional way,” Sec. Briones noted.

Citing that the program is intended for the marginalized sector, Briones shared the collaboration of DepEd and then-Davao City Mayor and incoming Vice President and Education Secretary in offering ALS to the city inmates.

“I have seen and met young jail inmates in Davao with the initiative of former Mayor Sara Duterte, who benefited from the ALS. We are reaching out not only to those in the streets, farmers, factory workers, but also to those who are in prison and those who are in remote places,” she shared.

Under the Duterte administration, the ALS was also institutionalized through the passage of Republic Act 11510, which ensured bigger budget allocation and further support of key stakeholders to the program.

“When the Senate and the House initiated the ALS act, it became a landmark legislation aiming to institutionalize the ALS program, and this cannot be possible without our President. When I first came in, we increased the budget of the Department of Education by 30%, most of it going to the ALS programs. So, we are now feeling much more secure because we are backed up by law and supported by other branches of the government,” Briones said.

“While there are still challenges in basic education, we have made significant progress over the past six years. We have endeavored to ensure that education must continue and that no one is left behind. This is the Education Legacy of the Duterte Administration,” Briones said.