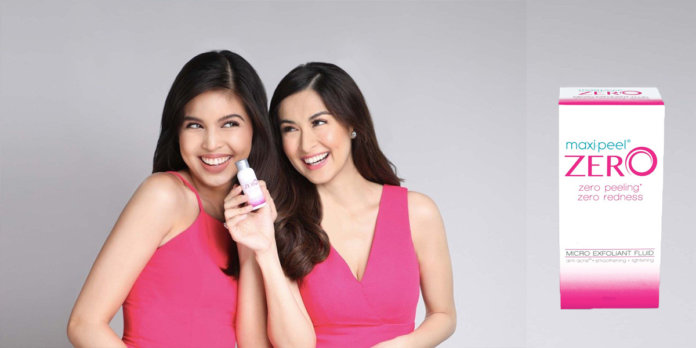 Since her early days in showbiz, Primetime Queen Marian Rivera has been an icon of beauty and sophisticated grace. Her radiant glow, along with her dedication to her family and many advocacies, has earned her a rightful pedestal as one of the country’s top celebrities.

Marian’s beauty is timeless. Classic. And her flawless skin has been taken care of by a brand she has stayed loyal to for over 10 years, Maxi-Peel. Her supporters who have watched her grow in the industry love her candor and authenticity—so much so that they’ve also supported every brand she chose to work with, knowing that she’d only endorse products she has a genuine regard for. Marian has been a long-standing partner of Maxi-Peel, ensuring that every campaign they release is more successful than their last one.

To put it simply, she is an inspiration to everyone who knows her name, including the Phenomenal Star Maine Mendoza.

For days, it has been hot news that Maine has switched from her old cleanser and will be joining Marian in endorsing Maxi-Peel ZERO, an innovative new micro-exfoliant that promises glowing and radiant skin. Her main reason for making the switch? Her ate, Marian Rivera.

Much like Marian, Maine’s rise to stardom can be attributed to her candidness on and off the screen. In an industry that thrives on playing roles, Maine’s fans remained loyal to her because of her youthful spark and bona fide authenticity to herself and to everyone else. Every product she ever endorsed was a successful sold out situation that drew snaking lines and top trending topics on launch day.

Maine’s natural self is her best feature. Her effortless beauty is the desire of millions of her loyal supporters. And it won’t be long before those supporters make the switch to the latest addition to Maine’s beauty arsenal and the secret to her glowing skin, Maxi-Peel ZERO.