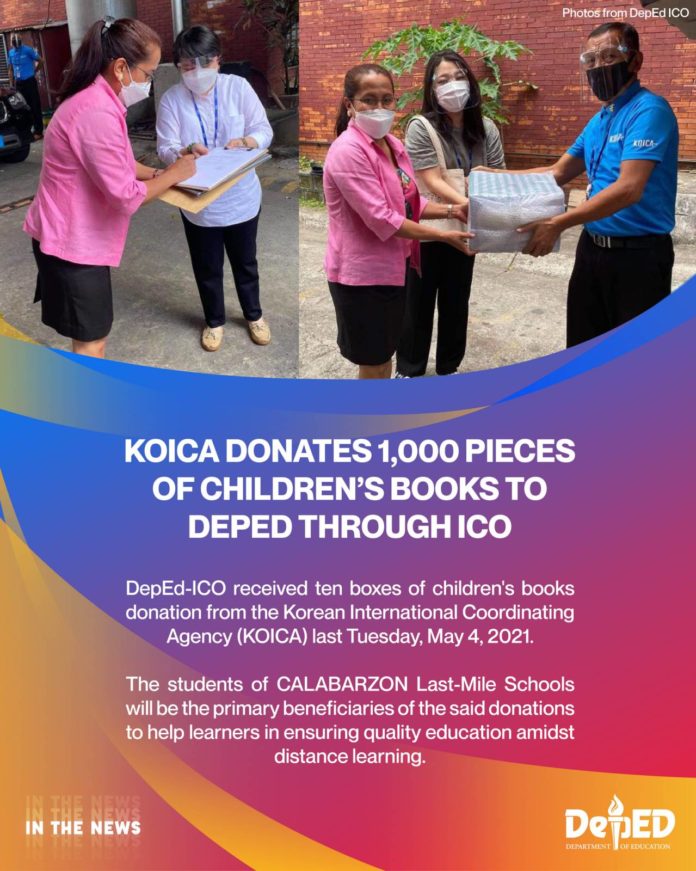 Before their delivery to CALABARZON Last-Mile Schools, samples of the books will be reviewed by the Bureau of Curriculum Development (BCD) and Bureau of Learning Resources (BLR) of the Office of the Undersecretary for Curriculum and Instruction (OUCI) to ensure that the books are consistent with DepEd issued learning materials.

Last Mile Schools, under DepEd Memo No. 059, series 2019, are schools located in Geographically Isolated and Disadvantaged Areas (GIDA), with indicators such as less than four (4) classrooms, with non-standard rooms, absence of electricity, no funds for repairs within the last four (4) years, travel distance of more than an hour from the town center, having multigrade classes, with less than five (5) teachers, less than 100 learners, and more than 75% IP learners.

DepEd, through ICO, is currently exploring areas of possible collaboration with KOICA, which may eventually lead to the drafting of a Memorandum of Understanding (MOU), to maximize the benefits of the partnership for basic education stakeholders.

KOICA (Korean International Cooperation Agency) was established in 1991 by the Ministry of Foreign Affairs of South Korea as a governmental organization for Official Development Assistance (ODA) to enhance the effectiveness of South Korea’s grant aid programs for developing countries by implementing the government’s grant aid and technical cooperation programs.

By its creation under DepEd Order No. 19, series 2010, ICO was mandated as the specific office within the Department to oversee its international concerns and serves as a clearinghouse for all its international transactions.

About the Department of Education

The Department of Education (DepEd) formulates, implements, and coordinates policies, plans, programs, and projects in the areas of formal and non-formal basic education. It supervises all elementary and secondary education institutions, including alternative learning systems, both public and private; and provides for the establishment and maintenance of a complete, adequate, and integrated system of basic education relevant to the goals of national development.