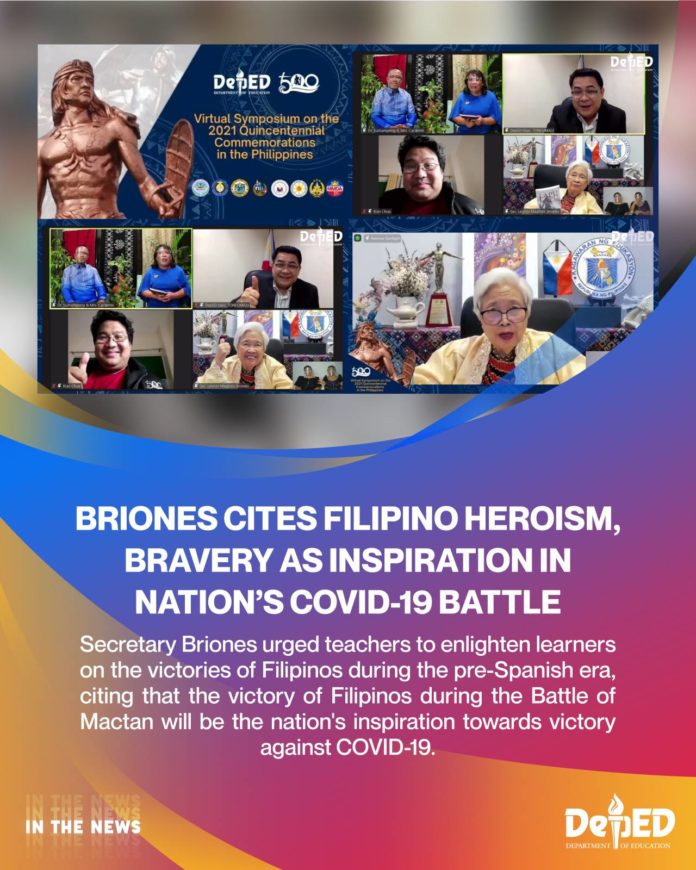 Bravo Filipino | Briones cites Filipino heroism bravery as inspiration in nation’s COVID-19 battle | June 7, 2021 – With education still facing the challenges brought about by the pandemic, DepEd Secretary Leonor Magtolis Briones has looked to history to rally stakeholders in contributing to the improvement of the public health situation.

In particular, Secretary Briones cited the victory of Filipinos during the Battle of Mactan will be the nation’s inspiration towards victory against COVID-19 during the Virtual Symposium on the 2021 Quincentennial Commemorations in the Philippines (2021 QCP).

“The bravery and victory of Baganis will be our inspiration towards victory against COVID-19…the time will come when we will defeat COVID-19,” Secretary Briones said.

“Let us sustain within us the spirit of heroism and humanity in fighting the challenges of our time,” she added.

“Since most of the accounts on the Battle of Mactan are Euro-centric, I grew up thinking that we were discovered by the Spaniards. We used the Philippine Readers as elementary students from 1920 to 1960s. Now, how many million learners whose minds were conditioned to this thinking? We have a lot of work to do, especially we in the Department of Education, to break this perception of being discovered and teach learners that even then, we have a vast culture of victories,” she emphasized.

“I grew up reading comic books with Bagani as characters. When we think of Baganis and [our] defenders, they lead where he needs to lead without expecting any return – not thinking that he should do something to become a hero,” she added.

Bagani is a Manobo word for ‘warrior’ and ‘leader’. It is also the title of the theme song of the 2021 QCP.

Meanwhile, Undersecretary for Finance Annalyn Sevilla, who served as the Department’s representative in the National Quincentennial Committee, elaborated the essence of celebrating the historic event that happened on April 27, 1521.

“It ignited the Filipino spirit of bravery, humanity, unity, and heroism. Our founding fathers have offered and sacrificed everything to ensure and secure our independence as a nation. Therefore, it is our obligation as successors to fill in and safeguard our independence that our heroes earned,” Undersecretary Sevilla said.

At the latter part of the virtual symposium, Undersecretary for External Partnerships Tonisito M.C. Umali, Esq. discussed on the legal bases of the commemoration and its present importance.